Old castles have unique characters and stories that breathe from its walls and grounds. From north to south, Italy is dotted with them and from town to town, the sizes depend on the wealth of the town and settlers in the ancient times. The important ones have been converted to museums and hold the ancient treasures found in the area. But there are also the minor castles with histories of their own, some maintained well by the succession of heirs while some are forgotten while nature slowly takes over it. 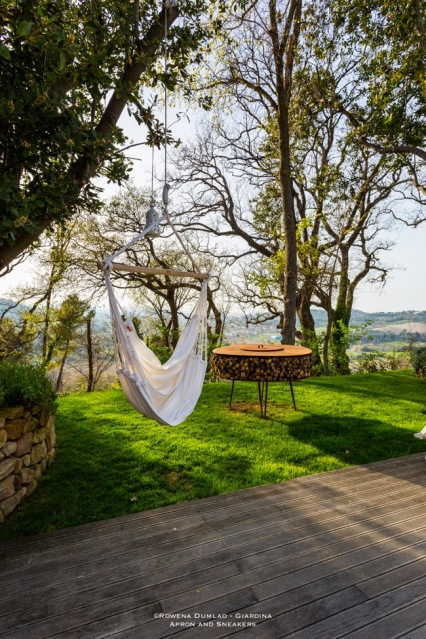 The story of the Castello di Granarola was one of those castles that enjoyed the importance in its realm then eventually crumbled over time. The Castle of Granarola got its name from the agricultural area around it. The castle could have been around in the 6th century but the first historical indication of the castle was in 998 and it was owned by the archbishops of Ravenna for over a hundred years. A parchment dated 1192 illustrates that the castle was already surrounded by a boundary wall. Check the site’s history page. 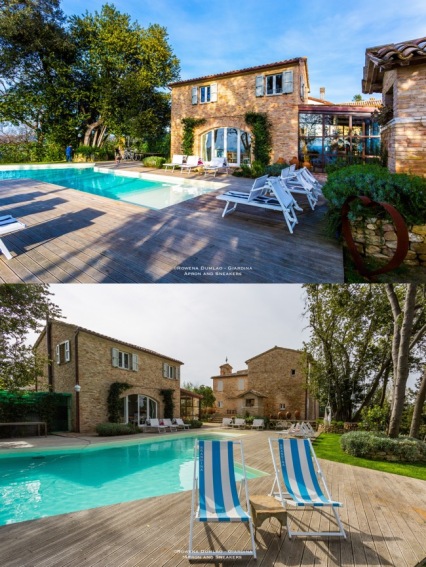 In 2008, and 4 years from then on, the owners of Brandina, both architects and artists, renovated the whole castle from its complete rundown state to its present glory.

With the involvement of the local laborers and professionals, the castle stood up again retaining its former glory but equipped with the luxuries of modernity inside its premises.

You should see how the place looked like before restoration.
I only saw impossibility in them but I guess from architects’ perspectives, we are on different wave lengths. The name remained and the story continues in modern times.

The castle has 9 residences, each designed with unique characteristics. They are housed in the two buildings of the castle. Some have their own terraces too. Just going through the photos of the residences in their site had been so interesting. Each residence is equipped with a little kitchen corner complete with all the daily necessities that you need like dishes, dishtowels, glasses, stove, fridge, TV, safe, coffee maker and so many things more. 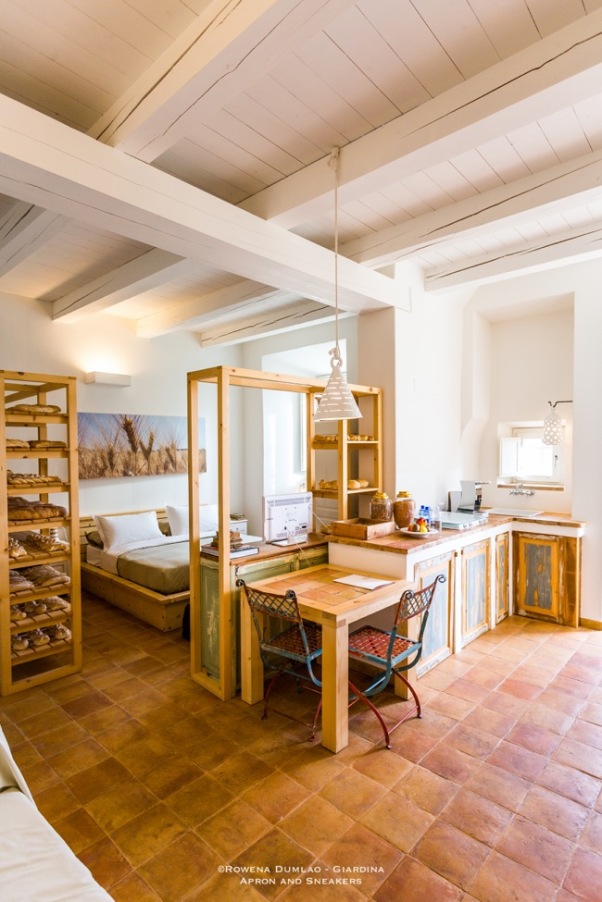 My family and I stayed in the Granary (Granario) room where it was particularly interesting to be surrounded by different kinds of bread. I did see that in their site and had been wondering if they were real or not. The first thing I did was ask if they real (they are and they are dried) and well, I couldn’t resist touching one for myself. In fact, when we went to Locanda Quinto Canto, a restaurant in Gradara that the hotel suggested (you have to try it if you are in the area by the way), the person serving us asked if the bread in that room were real or not. It does perk everyone’s interest! 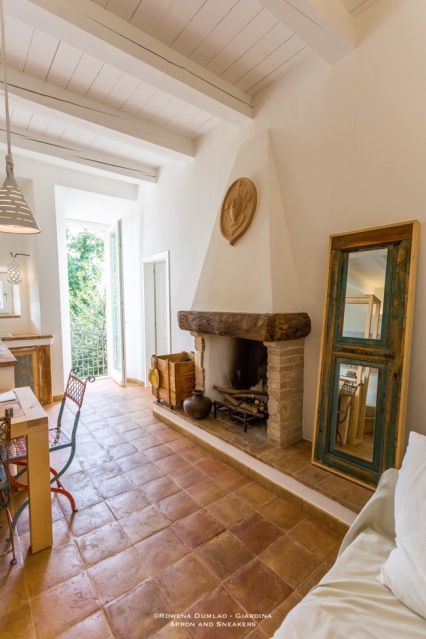 Our room has a fireplace, a private garden that leads from the kitchen door and also an independent entrance. The room is perfect for a couple and a maximum of 2 small kids because the kids sleep on a small sofabed that can be quite uncomfortable for bigger kids, especially adults. 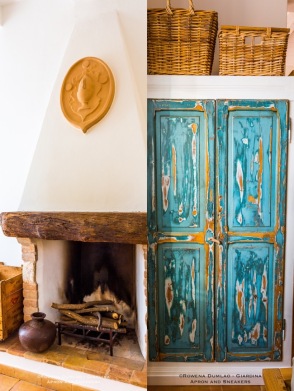 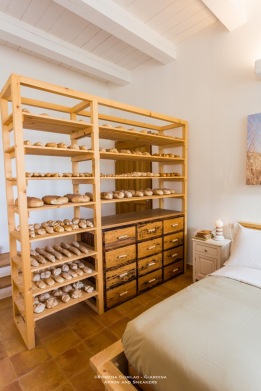 Their outdoor table that leads from the kitchen is a perfect setting for those outdoor warm summer dinners and drinks. If you don’t feel like cooking, there is also a trattoria (a small restaurant), at the foot of the castle, right next to the parking. Since we only stayed for a couple of nights, we weren’t able to try it at all but we heard and read that it is a good place to eat. You can also ask for take-out to take to your own room. 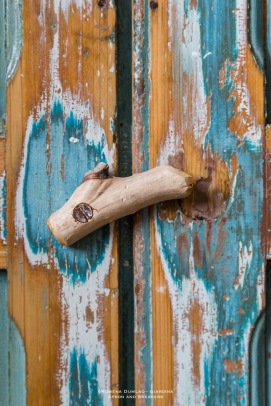 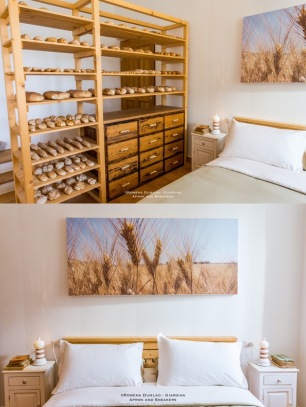 I love how the local artisans works have been showcased in the hotel and how visually pleasing it is from the time you enter the gate. Every little corner  and detail is a pleasure to see and in my photographer’s mind, to capture in my lens.

One of the rooms we were shown is the Fox’s Den (La Tana della Volpe). It has such an interesting layout where you enter from the common area (picture above). There’s a short corridor that leads to the bedroom where the bed in sunken on the ground, which is a step or two down. From the bedroom, the fun begins!

There is another short tunnel. To the right is the closet room (if I am not mistaken) and to the left, you will be confronted by a long lighted tunnel with little corners along the way for the toilet, bath, sink, all separated. The tunnel ends at the kitchen area with the glass doors and it leads to a private pocket garden. It’s the room for those people who want something extraordinary. 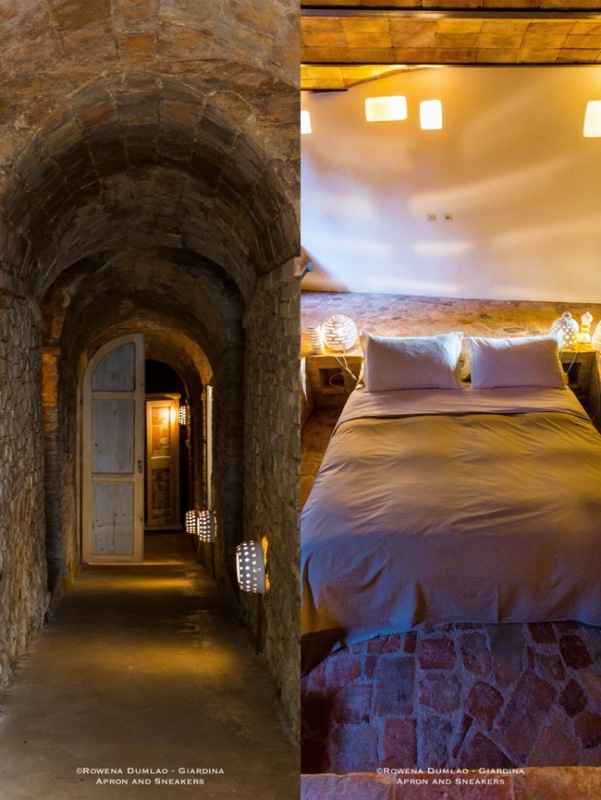 The Castle of Granarola is a great place to position yourself when you want to explore the towns of the regions of Marche and Emilia-Romagna. It’s very close to Cattolica if you want the beach and Gradara, a beautiful small hamlet. We also saw a lot of small fortified towns around the area. A little travel to the Republic of San Marino, Corinaldo, Mondavio, etc. The place is crawling with so many beautiful places to see that a weekend is not enough to see them all. I’ve been coming to this area 3 or 4 times already and I have yet to see so many new places. 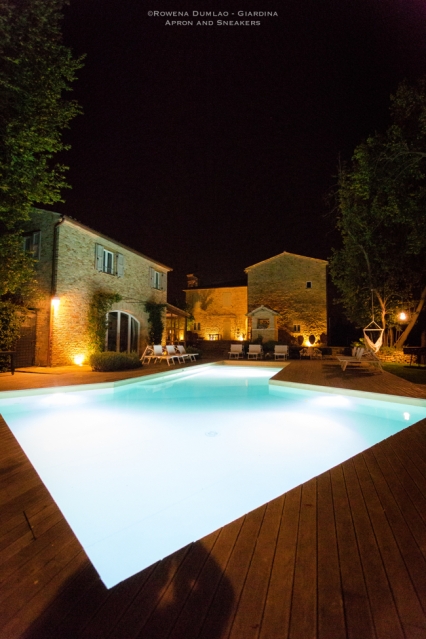