Considered as a minor grape, Ciliegiolo has long been overshadowed by Sangiovese throughout its course of history but in the recent years, interest has grown in the grape variety. It is now being produced as a dominant variety in blends and even more, single varietal wine in various wine regions of Italy like Liguria, Marche, Abruzzo, Lazio and Tuscany. Historically, its earliest mention was in the 1600s by Italian agronomist Giovan Vettorio Soderini in his book about viticulture Trattato della Coltivazione delle Viti e Del Frutto Che Se Ne Puo Cavare (Treatise on the Cultivation of the Vineyard and the Fruit That Can Be Obtained). It was mentioned that long-clustered large grapes called Ciriegiuolo Dolce with sweet and fragrant flavor and favoring warm climates was being cultivated around Florence in that period. The description of which matches the Ciliegiolo.

Ciliegiolo, a parent of Sangiovese, is an autochthonous black grape variety from Tuscany where it grows particularly well in the area of Maremma, the coastal area of the western part of central Italy, bordering the Tyrrhenean Sea. It takes its name from the aroma that recalls cherries. Favored as a blending variety, it beneficial to the wines that have low alcohol and high acidity because it provides sweet fruit-forward flavors and softness. Whereas when it is vinified in pure form, Ciliegiolo displays remarkable characteristics of ruby red color, favorable alcohol content, low acidity, complex aromas, vigorous structure, long persistence and bold tannins with an excellent potentiality towards aging.

Rascioni and Cecconello is a biological wine estate on a hilly terrain with an elevation of 100 m.a.s.l. located in Fonteblanda (Orbetello) in the Maremma area of Tuscany where it enjoys a close proximity to the Tyrrhenian Sea. It has 5 hectares of vineyards dedicated to Ciliegiolo and Sangiovese and a little bit of Vermentino. The soil has a major amount of skeletal fractions which contribute to the territorial acidic characteristic in their wine.

It is a family-owned winery that was founded by Paolino Rascioni then handed over to his daughter Sabrina Cecconello and her husband Paolo Papini manage, along with their son, oenologist Emanuele Papini, who holds the key role of overseeing the overall production of the wines. Emanuele takes care of phases from the cultivation in the vineyards to the vinification in the  cellar under the guidance of oenologists Giacomo Cesari and Attilio Pagli. The main wine production is from Ciliegiolo which are Poggio Ciliegio and Rotuliaia, with an addition of Marremino which is a blend of 85% Sangiovese cut with 15% Ciliegiolo and an only white, Osa composed of 85% Vermentino and small percentages of Viognier and Sauvignon.

Rascioni and Cecconello is among one of the first wineries that chose to cultivate and vinify Ciliegiolo, majority of which are thirty year-old vines while making Sangiovese only secondary in the vineyards. The vinification containers of the wines are exclusively in concrete tanks with the exception of Poggio Ciliegio which passes through aging in regenerated French oak barrique of second to third passages. The great thing about using concrete tanks for both the fermentation and aging of the wine is that they get the best characteristics that it could get if they passed through steel and oak. The porous walls of the concrete have tiny pockets that are able to trap air which limit the contact of the wine with oxygen. Unlike oak, it doesn’t impart any oak flavor but attains the roundness and softness in aging while the intensity of the fruity varietal characteristics remain intact.

At a recent tasting at Rascioni and Cecconello with the Papini family, there were barrel tastings of the Ciliegiolo from the 2019 harvest in the cement vats and Ciliegiolo from the 2018 harvest in the barrique, as well as bottle tastings of the Osa 2018, Maremmino 2018, Rotulaia 2018, and a mini-vertical of their award-winning Poggio Ciliegio Riserva namely 2016, 2015 and 2011.

Osa IGT Toscana Vermentino 2018 is an equilibrated and elegant white wine that has a straw yellow color with a beautiful complex nose made of green fruit with crispy white pulp, pineapple, white flowers and herbaceous aromas while in the palate it opens to a pleasant fresh wine with good acidity, corresponding to its aromatic characteristics and finishes with excellent persistence.

Maremmino IGT Toscana Sangiovese 2018 is a ruby red wine with an interesting intense nose of red stone fruits and berries, spices and floral hints. In the palate, it finishes long with a lightly dense body, good balance and softness. 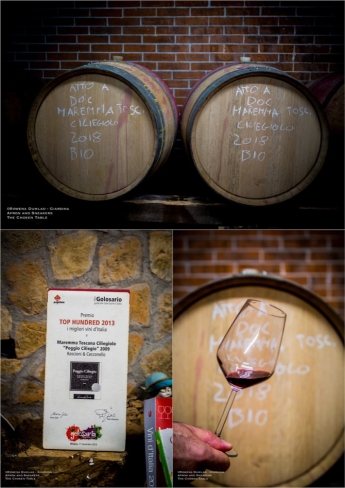 Poggio Ciliegio IGT Maremma Toscana Rosso Ciliegiolo Riserva 2015, 2016 and 2011. While all the wine production at the winery goes through concrete only, this is the only wine that is obtained from the oldest vines of the estate which are between 30 to 35 years old, partly aged in used French oak barrique for 15 months before being moved back to concrete tanks again for assemblage and further aging. The color of all three is dark and full ruby red and moving towards granite red. The nose has a beautiful ample complexity of forest underbrush, tobacco, spices, eucalyptus, preserved black stone fruits, with good intensity wherein the primary to tertiary characteristics are quite prominent and with age, the 2011 displayed them quite well. The mouth is full and round with an excellent dominance of acidity, elegance and persistence. Tasting the three vintages is a sensational experience which started with the 2015 then 2016 and ending with the 2011. While the nose just slightly differ from each other, it’s the palate that opened a lot of doors in understanding the excellence of Ciliegiolo. 2015 is robust while the 2016 expresses more elegance and refinement in the mouth. At nine-years old, the 2011 was aging ever so well giving exemplary acidity and very long persistence in the mouth.