At Gola, eating is not just for nurturing your hunger, it also connotes eating to enjoy it without sin. Born from the idea of 28-year old restaurateur Simone Segneri, who comes from a family involved in the food sector, Gola Restaurant has recently reformatted its appearance, philosophy and menu. The scheme of restyling starts with the overturning of the meaning of Gola which is no longer portrayed as a form of sin but a play on the senses. 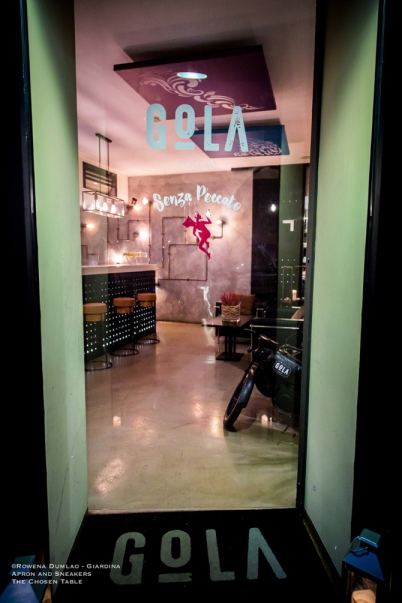 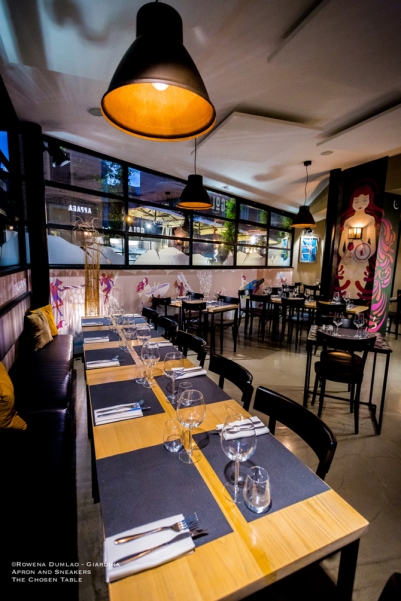 Gola has a strong brigade of young people under 30 whom Simone orchestrates.

At the helm of the kitchen is Chef Simone Ballicu who had various professional experiences in the Michelin-starred kitchens of Reale Restaurant of Niko Romito and Ristorante All’Oro of Riccardo di Giacinto, as well as Capo Faro of Ludovico De Vivo and a few more in the Roman area before arriving to the direction of Gola at the Parioli district of Rome. 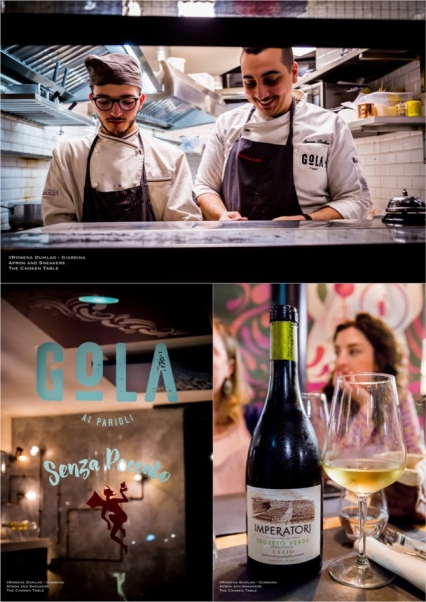 From the concept of Senza Peccato (Without Sin), Repubblica Gastronomica, a brand identity company that specializes in the food sector, has created a playful and colorful mood by painting the walls with little devils and seductive women to recreate Dante’s Third Circle of Gluttony from the Divine Comedy interpreted in a modern, fun and delicious way. Gola sits on a corner road at Via Ruggero 2 in the upscale neighborhood of Rome in a 120-square meter space accommodating forty seats inside and another twenty outside (on warm weather).

“I decided to give a stronger identity to the restaurant both in its external appearance and in the menu created by Chef Simone Ballicu. We are a young team, under 30 and we work with passion to offer customers a moment of real pleasure,” says Simone Segneri.

The kitchen of Simone Ballicu presents a traditional cuisine propelled with hints of innovation without upsetting the real essence of the raw materials, rather to enhance their quality. The menu he composed for Gola has no classic divisions among appetizers, first dishes of pasta and main courses, making it a pleasurable and scrumptious sensory journey in both form and substance. 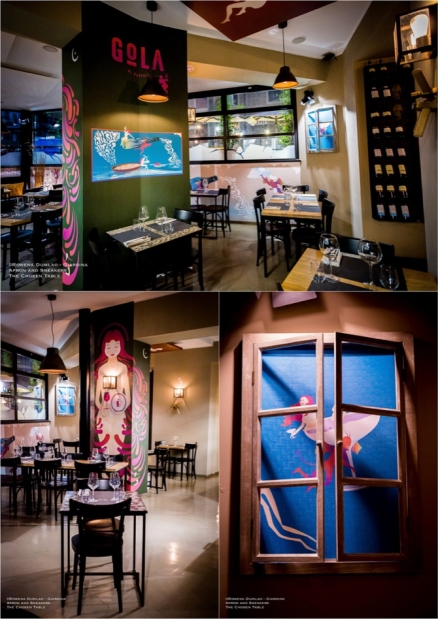 Having no classic classifications of different courses, the dishes can be eaten without order, just leaving your cravings run through the menu.

The price range is between €10 to €19 while the desserts are at €7. Tasting menus including the chef’s amuse-bouche are also available: Divino (€37), a tasting menu composed of six revisited versions of classic meat dishes of mostly Roman cuisine. Gola (€45), a seafood-based tasting menu of seven dishes. Caronte (€40) instead is a tasting menu that will be created by the chef at the moment.

The wine menu was created by Simone Segneri who is also a sommelier. With the 34 labels available, he focuses a wide arc of labels from medium to big Italian producers as well as a few champagne labels. 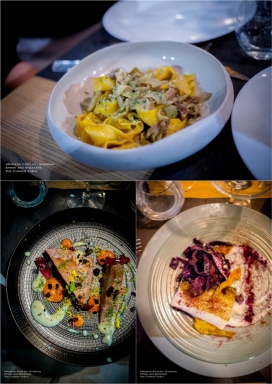 Worth mentioning in the menu are Matrù (€12), sandwiches made with steamed Chinese gua-bao filled with Amatriciana-style stewed pulled pork and Pecorino sauce. The Amatriciana (€13), one of the revisited classic dishes, is composed of capellaccio pasta filled with liquid amatriciana sauce on a bed of Pecorino sauce and topped with crunchy guanciale. For the dessert, Accidia (€7) is a simple and delicious apple sponge cake with cinnamon sauce.

Sundays at Gola are also celebrated with the traditional Italian Sunday lunches inspired by classic recipes concocted by grandmothers in the kitchen. There are choices between Inferno (€30) composed of appetizers, first and second dishes while Purgatory (€25) has appetizers and a choice of first or second dish. Both menus include a rich buffet of homemade desserts but excluding drinks.