Conversano, formerly the ancient Cupersanum, was inhabited as early as the Iron Age, the last of the epoch of the protohistory of humanity after the Stone Age and Bronze Age, when the Peucetians founded Norba. Later on, in the 6th century, it flourished into a trading town with strong influence from the neighboring Greek colonies. It was then conquered by the ancient Romans in 268 B.C. and came the invasion of the Visigoths, the nomadic tribes of the Germanic peoples during the Migration Period. Under the Normans, it gained importance when on 1054, Lord Geoffrey, the Count of Conversano, turned the town into the capital of a large county. 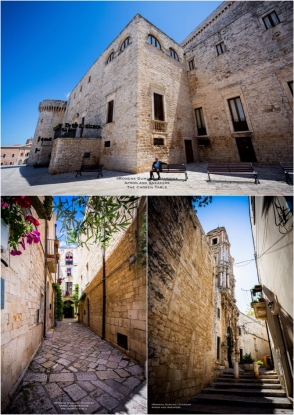 Conversano is a part of the province of Bari in the southern region of Puglia and lies 30 kilometers southeast of Bari and 7 kilometers from the Adriatic Coast.

Reaching it gives you a beautiful panorama of fruit tree orchards of olives, almonds and cherries. Fields of hay bales scattered about with the nearby outline of the sea runs along the coastal road of the Cozze Beach towards Polignano a Mare. The town is an architectural gem that kept its rich culture of influences for thousands of year intact in the ancient part of the town with the 11th century Conversano Castle as the focal point of interest as you arrive at the town. 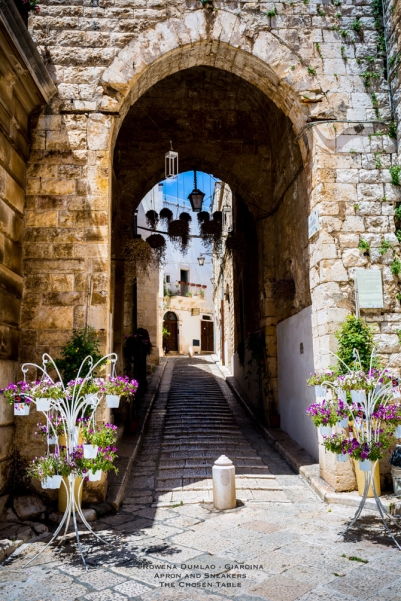 In the 17th century, the city experienced a great period of prosperity under the rule of Count Giangirolamo II, also known as Guercio delle Puglie, who is famous for his rash chivalrous temperament. He increased the artistic collection of the city by commissioning the work of Neapolitan artist Paolo Finoglio for the castle and the Chiesa dei Santi Medici Cosma e Medici. 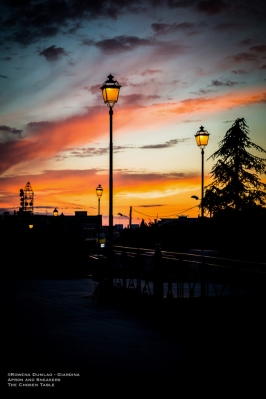 What to See in Conversano

Cooperativa Armida | Website: https://www.cooparmida.org/servizi.asp | Tel: +39 080 4959510 | Email: coop.armida@gmail.com | Facebook: https://www.facebook.com/cooperativa.armida
An association of local expert guides that provides guided tours of the museums, churches and other points of interests in Conversano.

Castello di Conversano | Address: Corso Domenico Morea 70014 Conversano (BA)
The imposing symbol of Conversano which stands in the main square of the city. The castle was built in the 11th century then it underwent periodic modifications adopting Rennaisance and Baroque characteristics.  It was the residence of the Counts of Conversano for seven centuries eversince the Norman period. 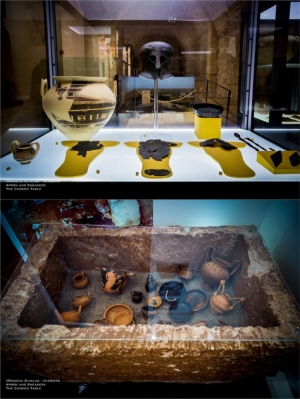 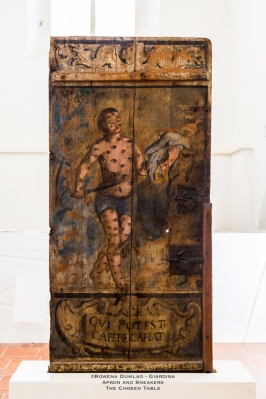 Monastero e Chiostro di San Benedetto | Address: Via S. Benedetto, 70014 Conversano (BA)
Founded in 957 which was later abandoned due to the results of the conflict between the Swabians and the Angevins. It was then entrusted to the Cistercian nuns in 1266 from Greece under the guidance of the Abbess Dameta. The monastery took over all the rights and privileges usually granted to the monks and it was the only female monastery in Europe wherein the nuns were allowed to wear male religious symbols such as the mitre. It was one of the most powerful monasteries in Apulia exercising jurisdiction not only on the churches of San Benedetto of Polignano and San Nicola of Monopoli but also on the land and clergy of Castellana. This feudal and ecclesiastical jurisdiction lasted until 1810 when the privilege was abolished and the monastery entrusted to the authority of the Bishop of Conversano. The church has maintained much of the original structure from the 11th century while the side entrance was built in 1658. It has a Baroque nave and two aisles and paintings by Paolo Finoglio. Next to the church is the Medieval Cloister built between the 11th and 13th centuries. It has a trapezoidal shape with beautiful carved column capitals. 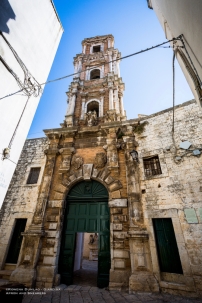 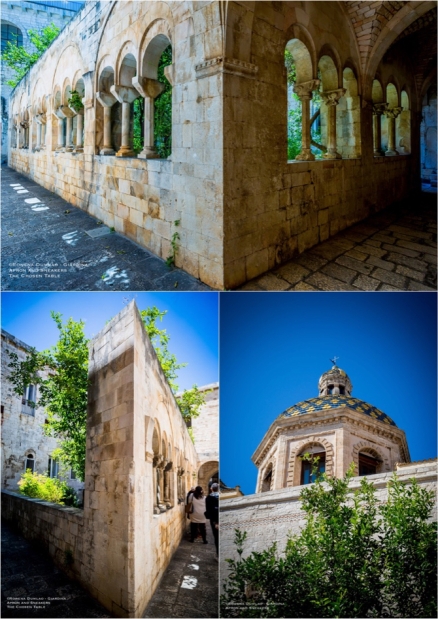 Pinacoteca Civica Conversano | Address: Piazza della Conciliazione 86, 70014 Conversano (BA) | Tel: +39 080 4958525
The museum is located inside the castle with the small entrance facing the square, right next to the tower. It houses the masterpieces of the Neapolitan artist Paolo Domenico Finoglio, an artist from the early Baroque period. His tenebrism style, which have a dramatic illumination were highly celebrated especially by the Count of Conversano, Giangirolamo II Acquaviva d’Aragona who commissioned a series of ten large canvasses on the episodes of Torquato Tasso’s Gerusalemme Liberata in 1622.

Chiesa dei Santi Medici Cosma e Damiano | Address: Via Capone 34, 70014 Conversano (BA) |
Count Giangirolamo II Acquaviva d’Aragona and his wife Isabella Filomarino commissioned the complete renovation of the ancient Romanesque church of San Matteo and renaming it as Chiesa dei Santi Medici Cosma e Damiano to whom the count is particularly devoted. The interior decoration was handed to the painter Paolo Domenico Finoglio who died without seeing the completion of the work. Outside, the church displays simplicity with local limestone walls, door and two windows. Its tall brick bell tower stands out from the facade. Quite notable is the contrast of the simplicity of the exterior and the rich Neapolitan Baroque interior of the church where the splendid frescoes of Finoglio are displayed starting from the church’s vault. 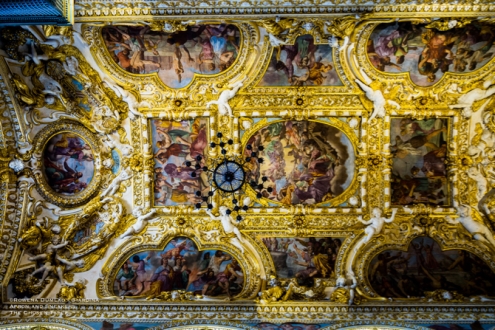 Cattedrale di Santa Maria Assunta | Address: Via Porta Antica 3, 70014 Conversano (BA)
Built between the 11th and 12th centuries, this Romanesque church, also known as the Cathedral of Conversano, displays a large rose window in the facade. It is a typical depiction of of the Apulian Romanesque style with touches of Gothic and Byzantine styles. It was then renovated in 1358 to 1379 maintaining its original form. Other renovations followed in the 18th century and in 1911 after a fire. In 1997, Pope John Paul II elevated its status to a Minor Basilica. 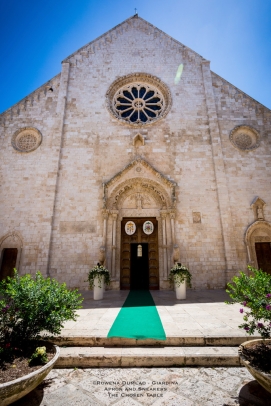 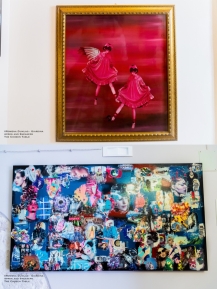 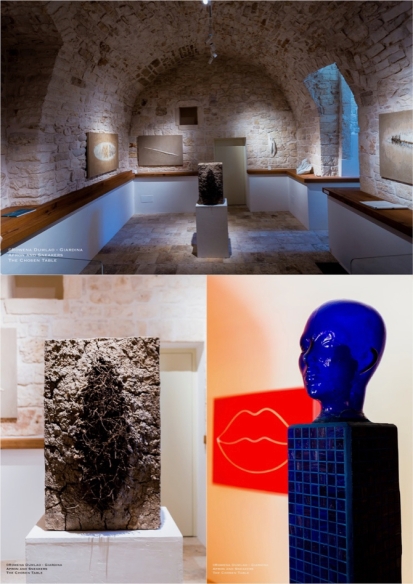 What to Do in Conversano

Cooking Classes with Associazione Turistica Pro Loco di Conversano | Website: http://proloco-conversano.blogspot.com/ | Address: Piazza Castello 12, 70014 Conversano (BA) | Tel:  +39 080 4951228 | Email: proloco.conversano@pec.it | Facebook: https://www.facebook.com/proloco.conversano/
Eating is one thing in Conversano but learning how to cook is taking it in a much greater level. The Associazione Turistica Pro Loco di Conversano (Pro Loco Touristic Association of Conversano) organizes cooking lessons in typical houses of some of their local food like the cherry jam and the Pastatelle, local sweet half moon pastries filled with cherry jam, walnuts and orange zest. 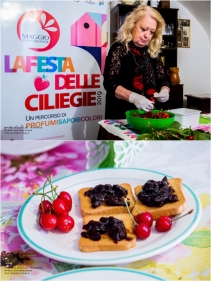 Environmental Guided Walks with Associazione Polyxena | Website: http://www.polyxena.eu | Address: Via Petrarca 12, 70014 Conversano (BA) | Tel: +39 339 2784753 – +39 339 2960919 | Email: info@polyxena.eu | Facebook: https://www.facebook.com/apspolyxena
Another way to enjoy traveling is going off the beaten track by taking a guided walk in the countryside with an expert environmental guide who can explain the naturalistic features of the rural landscape of Conservano. Between old trees, wild plants, dry stone walls found in the path, there is always a lot of very interesting information to be learned that’s intertwined with history and tradition.

Trekking with Associazione Puglia Trekking Escursionismo | Tel: +39 347 1152492 | Facebook: https://www.facebook.com/trekkingpuglia/
More hidden that entails more challenging trekking activities are the itineraries organized by this association composed of biologists, speleologists, documentarians and naturalists. Their principle of slow tourism takes the participants to a diverse kind of discovery wherein there the secret gem of Puglia can be appreciated. Unfrequented old mule tracks rural settings of the historical ancient paths of the pilgrims, the passages of the aqueducts, ravines, geosites and much more, can be seen through the most concealed countryside of Conversano.

Festa delle Ciliegie (Cherry Festival)
Every month of May, Conversano celebrates the harvest of one of Italy’s most cherished cherry cultivars, the Ferrovia. These cherries have bright vermilion red skin with pinkish sweet juicy and crunchy pulp which is perfect for making jams and other food products. The month-long Cherry Festival is a part of the main event, Maggio Conversanese which focuses on the enhancement of cultural heritage, territory and local identity. Different kinds of festivities, exhibits, artistic and musical manifestations, and market stalls selling fresh cherries and jams, as well as other local artisan products transpire all over the town. 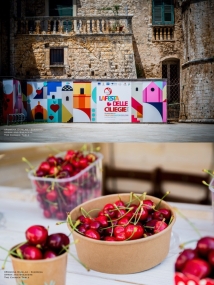 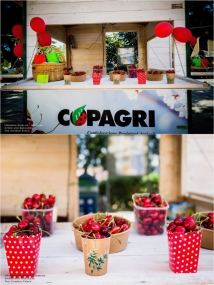 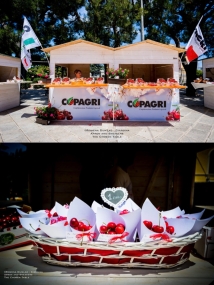 Digital Design Workshops with Spazio GAD (Giovani Attivi Digitale) | Website: https://spaziogad.xyz/ | Address: Via San Giovanni Bosco, 70014 Conversano (BA) | Tel: +39 389 5868599 | Email: spaziogad.info@gmail.com | Facebook: https://www.facebook.com/GADConversano
LABottega | Website: http://www.labottega.info/ | Tel: +39 080 4959792 | Facebook: https://www.facebook.com/LaboratorioUrbanoConversano/
Located in LABottega, the urban laboratory of Conversano, Spazio GAD is a project directed by Alessio Verdolino and carried out by the association of social promotion Venti di Scambio with the resources provided by the National Youth Agency. It is a workshop aimed at artisans and DIY enthusiasts, most especially young people, who want to try their hand at the basics of digital design and realizing projects using 3D printers and CNC pantograph.

Where to Sleep in Conversano

Agriturismo Casina Dei Preti |Website: https://www.casinadeipreti.it | Address: Contrada Cozze 9/A, 70014 Conversano (BA) | Tel: +39 320 0127686 | Email: info@casinadeipreti.it | Facebook: https://www.facebook.com/casinadeipreti/
Located about a kilometer away from the old town of Conversano and immersed in tree orchards in the countryside. Casina Dei Preti, as the name suggests was an old residence of priests wherein there is a small chapel inside the premises. There’s a vast well-maintained garden with swimming pool, and a restaurant where typical dishes are served using local ingredients. 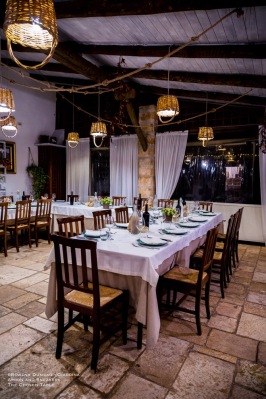 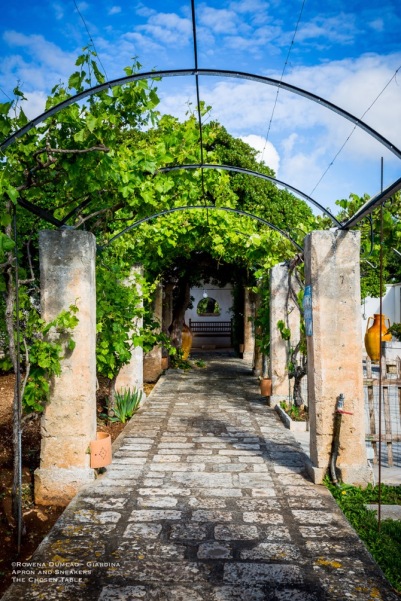 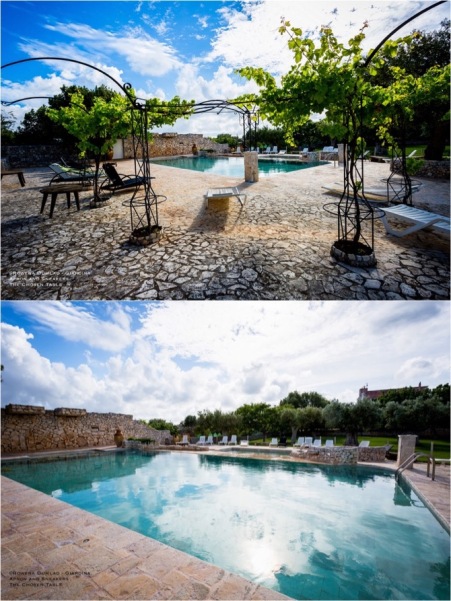 Agriturismo Montepaolo | Website: https://www.montepaolo.it/ | Address: Viale Montepaolo, 70014 Conversano (BA) |Tel: +39  080 4955087 | Email: info@montepaolo.it | Facebook: https://www.facebook.com/masseriamontepa
This farmhouse, immersed in a natural park of the WWF, used to be a 16th century hunting lodge of the counts of Acquaviva d’Aragone. It has an expansive garden with a big pool, an external dining hall mainly used for events and a small church with frescoes dating back from 1642. Two hundred meters from the hotel is an independent apartment set inside the historical 14th century Torre di Brigante. The hotel’s restaurant, which has received recognition from various guidebooks, serves excellent local dishes which they prepare by hands especially the pasta. 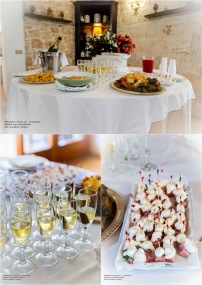 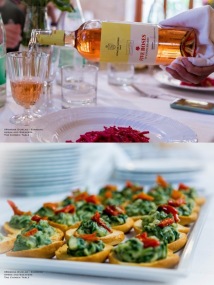 Where to Eat in Conversano

Pizzeria Terra Rossa | Website: www.pizzeriaterrarossa.it | Address: Corso Domenico Morea 14, 70014 Conversano (BA) | Tel: +39 080 4957208 | Email: info@pizzeriaterrarossa.it | Facebook: https://www.facebook.com/terrarossapizzeria/
A restaurant splashed with colors gives life to this restaurant that believes in the fresh quality of its ingredients. For that reason, they use only organic zero kilometer products of their area. Their philosophy is to give value to their land, which, on the table, they share the fruits of the local producers. Other than their pizzas, they have a notable kitchen serving local dishes like the cialledda, a healthy poor man’s dish with old bread and fresh vegetables dressed with oil and oregano. 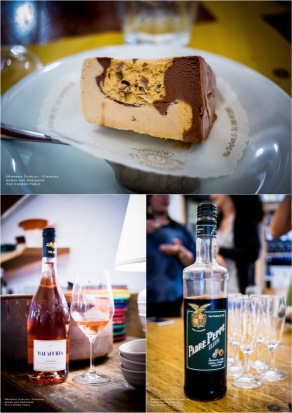 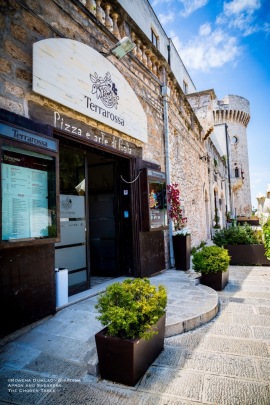 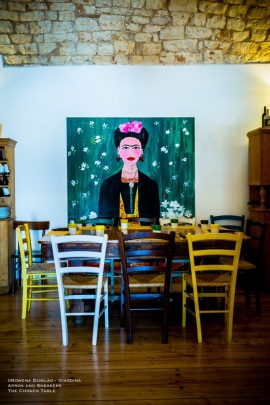 Ristorante Vita Pugliese | Website: www.vitapugliese.it | Address: Via Ospedale 15, 70014 Coversano (BA) | Tel: +39 080 4956929 | Email: info@vitapugliese.it | Facebook: https://www.facebook.com/VitapuglieseConversano/
Located close to the walls of the ancient city which is characterized by a typical Apulian white stone vault ceiling. The typical cuisine, presented with originality, merit to be tasted as they use products from the small local producers. Worth mentioning are the Cuttlefish Filled with Potatoes and Ricotta with Lemon and the Cannoli of Altamura,  thin crispy Altamura bread rolls filled with ricotta and a touch of orange marmalade. The wine list is furnished with interesting proposals from Puglia as well as from other regions. 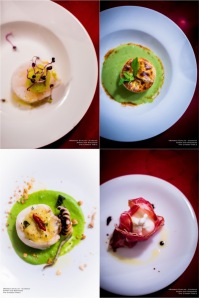 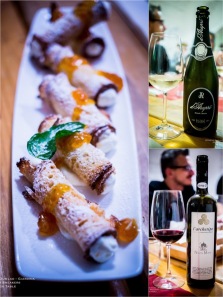 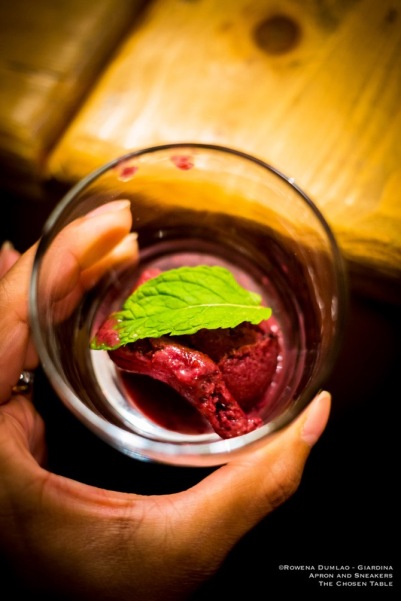 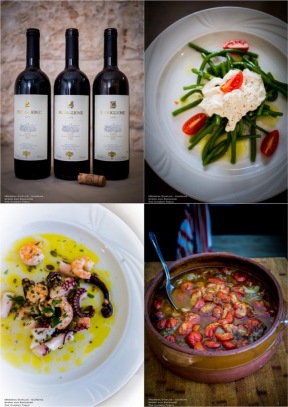 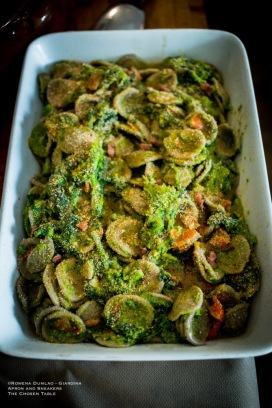 Ristorante Pashà | Website: https://www.ristorantepasha.com/it/ | Address: Via Morgantini 2, 70014 Conversano (BA) | Tel: +39 080 4951079 | Email: info@ristorantepasha.com | Facebook: https://www.facebook.com/ristorantepasha
Across the road from the center of Conversano is the 17th century Palazzo Vescovile where this Michelin-starred restaurant is located. Awarded continuously for the outstanding home-style cooking of Maria Cicorella and the impressive wine selection of her son Antonello Magistà. In the kitchen now, alongside Maria is Antonio Zaccardi, former sous chef for 12 years of tripled Michelin starred Enrico Crippa of Piazza Duomo Restaurant in Alba. (See previous article about it.) 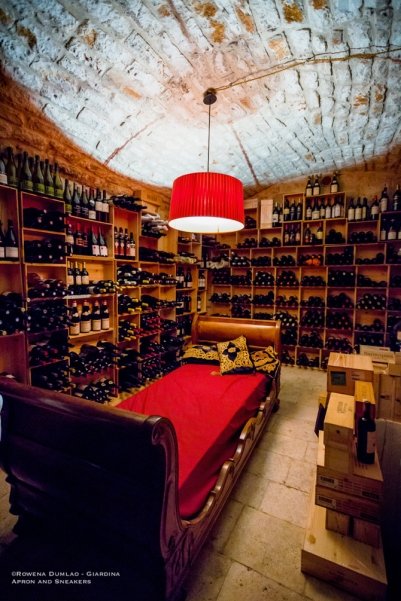