Sushi as we come to know it to this present day has been made in Japan since the Edo Period, around 200 years ago. It has been around even much before with a different method of preparation wherein the fish is fermented with rice vinegar, rice and salt, while the rice is discarded afterwards and not consumed. During the Edo Period, the haya-zushi or fast sushi was invented and it became the symbol of Japanese cuisine. It’s a kind of sushi assembly that we know wherein both the fish and rice mixed with vinegar can be eaten at the same time. With its incredible popularity, sushi has gone global, spreading all over the world and even conjoined with the local food culture of some countries. 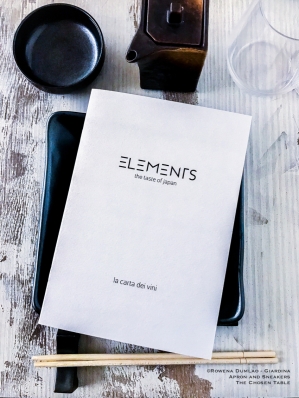 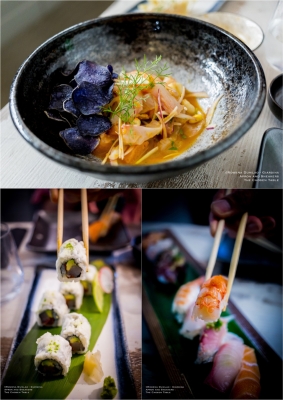 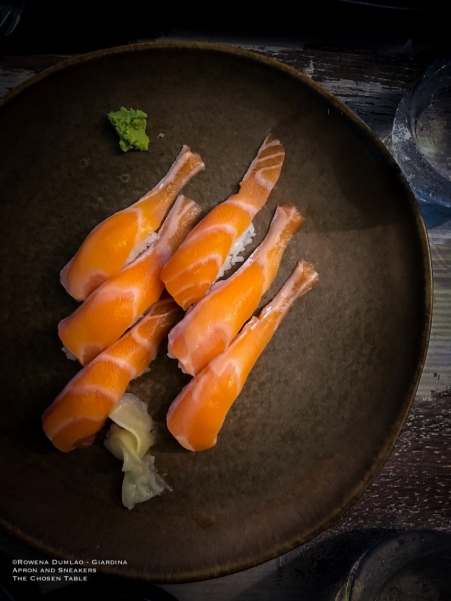 In spite of the presence of a big number of sushi restaurants in Rome, only a handful are able to represent the dish well. It’s a kind of dish that requires only the best and freshest raw ingredients and flawless skills of the sushi chef. Elements is a newly-opened restaurant of Roberto Langellotti in Via Palermo wherein Maurìlio Araùjo directs the sushi counter along with two other chefs. Maurìlio originated from Brazil then moved to Portugal in 2004 where he later mastered the art of sushi-making. Working as a sushi chef took him to different restaurants in Brazil, Portugal and various parts of Italy.

At the beginning of 2019, Maurìlio won the First Sushi Cup Portugal 2019 and represented Portugal in Japan for the prestigious World Sushi Cup 2019 where he finished as one of the top finalists. 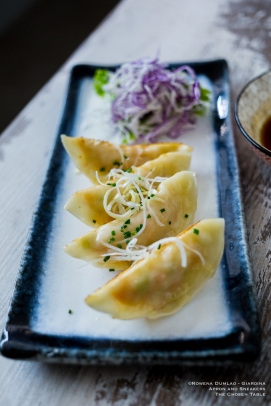 At Elements, Maurìlio presents a very interesting menu of classic and fusion sushi. The combination of flavors merge well in the palate and fundamentally, the ingredients he uses have exceptional quality. It’s no wonder that the restaurant has gained so much popularity when it just opened a couple of months ago. Booking is highly advisable.


It’s one of the best places to get fusion sushi in the capital. 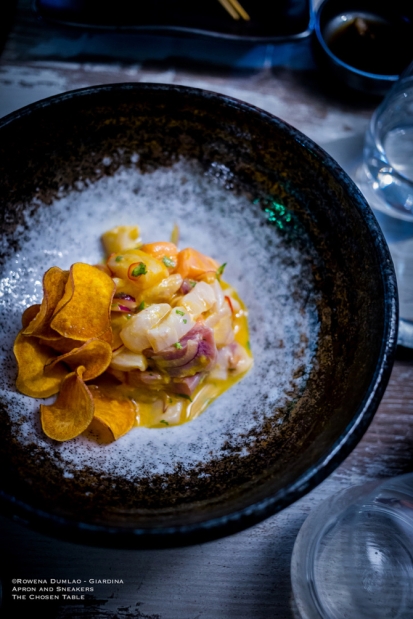 The menu is divided into four categories of Starters (€4 – €18) including dishes like Edamame, Miso Soup, Gyoza Wagyu, and Tori No Karaage (Japanese style fried chicken) to the more expensive and complex line of Signature Starters (€15 – €25) like Tataki Otoro (tataki tuna belly), Ceviche Nikkei and Anatra Tataki (duck tataki). Robata or Japanese Skewers (€6 to €15) with a variety of vegetables, scallops, Iberian pork, chicken and octopus. Signature Dishes (€13 to €65) include Bao Wagyu, Bao Shrimp, Wagyu (grilled slice of wagyu), Ramen, Udon and Glacier 51, considered the marine equivalent of wagyu in the culinary world which gives a delicate mouthfeel and sweet flavor. It comes from Heard and McDonald Islands and takes its name from the Fiftyone Glacier, one of the largest glaciers in the Australian Antarctic. For the sweet part, there are interesting creations of Mascarpone Mousse, Brownies and Cheesecake for the Desserts (€7 to €10). 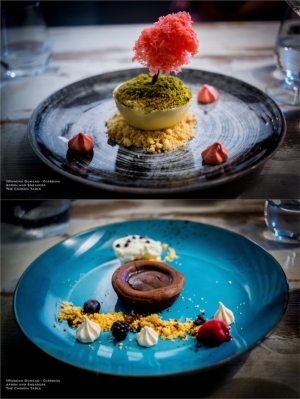 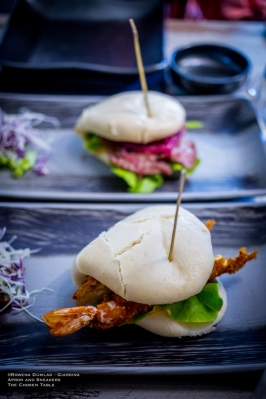 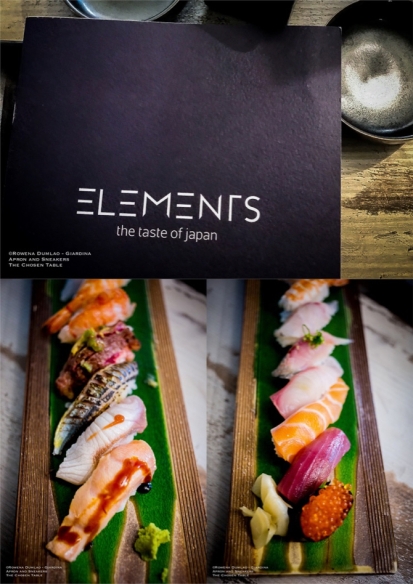 These pork chops were rubbed with salt and pepper then cooked with extra virgin olive oil, butter, fresh sage, garlic, onions and red wine. Whereas the potatoes were boiled until tender then I smashed them lightly. Most leave the skin on while I decided to do both with skin and without skin (the latter came out better and tastier). Cooked on both sides in a pan with extra virgin olive oil, a knob of butter of top of each, fresh rosemary and before taking away from the pan, sprinkling of Parmigiano Reggiano. Being lunch time, I decided to pair it with red wine that's young but has the right structure and great personality. The Invictus Ruchè di Castagnole Monferrato DOCG 2018 of Tenuta Montemagno Relais&Wines is made with the autochthonous grapes Ruchè cultivated in the Monferrato Astigiano area. It has a vibrant and deep ruby red color that gives, very dark hues and purple hints. The nose is intense with dominant spices, violets, roses, ripe red berries while the palate has underlined pepper, mature plums, red berries and other spices. Smooth, elegant, persistent and harmonious. This was really a very nice discovery! #ruchè #tenutamontemagno #piedmontwines #foodandwinepairing #italianwine #winelover #wineoclock #winetasting #vinorosso #vinoitaliano #redwine
Tornerò in montagna! Dolomite Mountains, Italy #dolomiti #italianalps🇮🇹 #italianalps #vacationinitaly #beautifuldestinations #beautifulitaly #altoadige #vacationduringcorona #whereareyougoingnext #camminareinmontagna #cinquetorri #cinquetorrilagazuoi #dolomitesitaly #dolomitemountains
A moment of happiness dining with the table positioned on the sandy beach eating traditional seafood dishes on a beautiful sunny day yesterday at Reef Village in Fiumicino. #diningduringcovid19 #beachrestaurant #diningonthebeach #wheretoeatinfiumicino #fiumicinoresturant #phase2italy #lifeduringcovid19 #lifeduringcoronavirus
Yesterday, I found some fresh garden peas from the local farmer stand and off they went to being shelled with the help of Sofia (who enjoyed the task but refused to eat them). For the dish, I decided to make barley salad with blanched asparagus, peas, basil, celery blossoms, lemon, and oil with the addition of tuna later on (which made it tastier). I paired it with Eleonora Perez's Vini Raimondo Cybelle Rosato IGT 2017. Made with 100% Cesanese di Affile, the grapes were harvested early by hand in late September, to maintain the crispiness. There was skin contact for 3 hours giving a clear salmon color, fermented in stainless steel and aged aged sur lees for 5 months with double batonnage a week to extract more aromas and flavors. The nose has a pronounced intensity of red berries and flowers. Strawberries make a prevalent impact, followed by other raspberries, sweet candy scent, and blush powder. In the palate, the wine is persistent, the acidity is high with pronounced sapidity. #laziowine #cesaneseaffiledoc #rosé #peas #peapods #freshfood #healthylifestyle #healthyfood #foodandwinepairing #rosewine #rosewinetime #summerwine #summereating #summerready #foodphotography #foodie #somlife #sommelier #lifeduringcorona #lifeduringcovid19 #healthysalad
Il Pesciolino Innamorato of Diego Gioia, the small restaurant along via Battista Grassi, didn't disappoint at all with their delivery service and the quality of the food. The tasting menu has excellent tasting dishes with generous quantities including dessert. There are also singular dishes to choose from the menu. #ilpesciolinoinnamorato #restaurantinfiumicino #foodiesofinstagram #foodiegram #foodielife #foodies #foodstagram #foodphotography #apronandsneakers #thechosentable #ristorantefiumicino
This is quite a refreshing spring meal of sole, fresh fava beans blanched then dressed in extra virgin olive oil, lemon, salt, mint leaves and celery blossoms, grilled zucchini with extra virgin olive oil and salt plus a bowl of strawberries with mint. I paired the fish and vegetables with a bottle of Sauvignon Blanc 2016 of Cantina del Tufaio of Nicoletta Loreti, a wine producer from the area of Zagarolo in Lazio region. Although it's meant to be enjoyed young, the wine is still continuing to show the peak of its lovely personality. In the nose, there is a good intensity of aromas of fresh tomato leaves, ripe peaches, lychees and fresh herbs. The sapidity is quite underlined in the mouth as well as the acidity and crispness. #sauvignonblanc #sauvignonblanc2016 #italiansauvignonblanc #cantinadeltufaio #springeating #springfoodandwine #foodandwinepairing #fishvegetableswine #laziowine